Poetry on Every Surface of Reykjavík

Today we are going to enter the lovely world of Reykjavík street art! Fair warning, there will be a lot of images (and a lot of translations to go along with some of the spraypainted typography on the street). Being from Chicago, I grew up with street art around me. I’ve watched friends sneak up to alleys just to tag their names all over buildings, dumpsters, windows, before risking the chance of being seen or caught by lingering police. The graffiti is everywhere, but it comes and goes quickly. Although I have never been to Iceland, in comparison it seems very open to the art that is public painting and design. There is an air of embrace of all things artistic and displaying it publicly seems a thing of pride and genuine expression. You can tell just by looking at the colorful city itself:

I was in the public library of the community college I attend here in Texas, and stumbled upon (of all things) a book of street art centered in Reykjavík. Flipping through the pages was certainly an adventure as I soaked in graffiti that was in Icelandic. Surprisingly enough, it seemed that about half of the writing was in English, which was very interesting. That isn’t to say that in a few pieces I was unable to tell whether the words were Icelandic OR English, which threw me for a loop: (This may in fact be a name).

While much of the graffiti seems to be political, there is also a poetic air to the tagging going on. Icelanders aren’t just tagging their names to make sure they’re read all across the city, but rather they’re writing provoking statements and questions that call for some interesting thought to the table. They also like to have a little harmless fun with it. One example is a photo taken by Börkur Sigurbjörnsson, who has gone on to explain that this particular work is a poem by Tómas Guðmundsson: 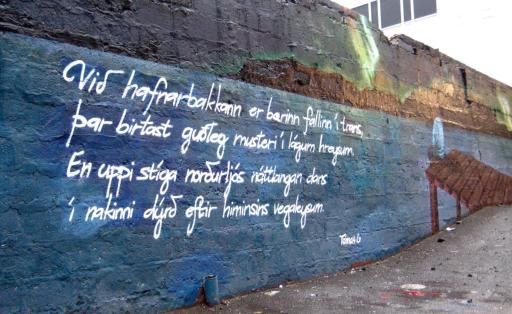 He roughly translates it as such:

“At the harbor-front the city has fallen in a trance, where appear divine temples in low-built shacks. But above the northern lights dance the night-long dance, in naked glory along the heaven’s unbeaten tracks.”

Another lovely example is a quite from Sigur Rós’ song “viðrar vel til loftárása.” This quote translates to “The best that God has created is a a new day.”

As you can see, everything here is very provoking and derived from an internal or openly lighthearted standpoint. There is an outreach to express much more than opposition. Based on the art produced and advertised in Iceland, you’d think it was easy for them to express in this way. It actually took a lot of time to get to this point, and graffiti is less common now than it was a few years ago. In 2008, it was documented that 42,000 square meters were covered with all sorts of graffiti in Reykjavík. Based on articles in the cultural newspaper The Reykjavík Grapevine, that number has gone down to 22,000 square meters as of the end of 2012. So why was it cut so abruptly in half? Well, as in any city, there was an outbreak of it. around 2006 and 2008, graffiti and general street art was still starting to develop. Once people caught onto the scene, it just grew and grew until the entire city was littered with murals, tags, drawings, and intricate typeface paintings synonymous to the “wild style” art that began in the Bronx. Fortunately for some, Iceland’s graffiti seems much more readable than what was going on in New York when graffiti exploded, but there is still that traditional style that occurs on Reykjavík’s walls, featured below:

Another harsh fact featured in the Grapevine was the mention of the city having to spend 159 million ISK (close to $1,500,000 USD) in 2008 just to clean up the city. It’s gotten better as of 2012, and artists can paint with permission from property owners, but the scene just isn’t what it used to be. Public spots open to graffiti have diminished and now it seems that Icelanders have to go through all sorts of agreements with property laws just to put up something artistic. That doesn’t seem to stop them though. I keep seeing this really neat wall mural surface online and I think it is a lovely display of what some Icelanders are doing with street art these days. 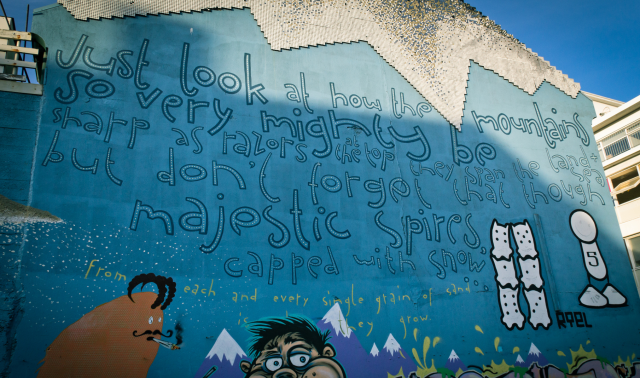 This work is a piece by Theresa Himmer and Sara Reil, which says “Just look at how the mountains, so very mighty be, sharp as razors at the top they span the land + sea, but don’t forget that though majestic spires, capped in snow…from each and every single grain of sand is how they grow.” The snow cap at the top, created by Himmer, is a large group of sequins that glitter when hit in the right way by the sun. Thankfully, this isn’t the only amazing mural that’s been up on the streets: 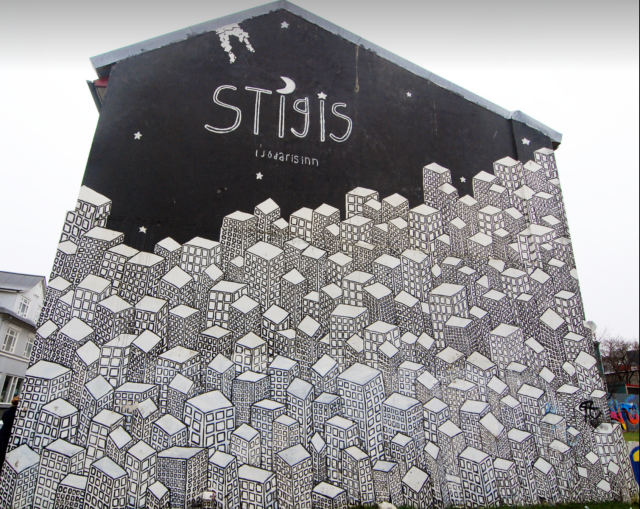 Despite the past of Reykjavík’s graffiti scene, it seems that artists and police are on good terms. There are a few charges each month but for the most part arrests aren’t frequented. Based on the blogs of other tourists in Iceland, it is easy to say that graffiti is almost as important to see as main attractions like the giant church Hallgrímskirkja. It is what creates the city and brings life to such a poetic, creative community of people. As a foreigner, it almost seems like the colored houses are defined as street art in themselves, because in the US, you see that much less. Houses here are very neutral and don’t pop out. You may see the occasional bright blue or red door, but entire pastel-painted houses are not common or sought after. It’s rather unfortunate, but it’s what makes cities like Reykjavík so unique. Here is a video of yet another collaborative mural by the Iceland Design Center, to prove my point:

That being said, I think the graffiti and street art in Reykjavík is what I’m looking most forward to as far as city attractions. 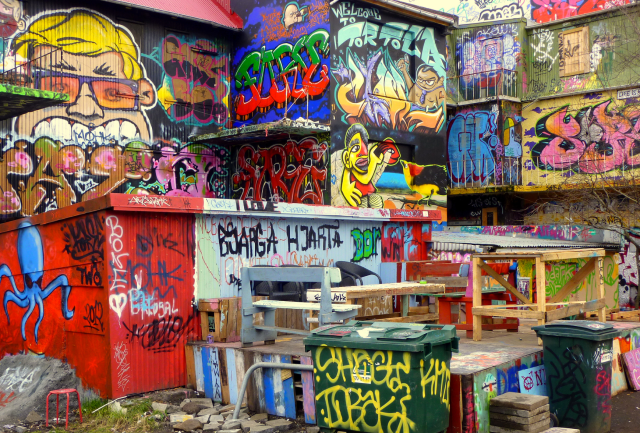 Like Loading...
This entry was posted in Uncategorized and tagged Art and Design, graffiti, poetry, Reykjavík, Sigur Rós, street art. Bookmark the permalink.