One aspect of Icelandic music that I find incredible is its take on lullabies. While stumbling around looking up Icelandic poetry online, I came across a lovely lullaby that trumped “rock-a-bye baby.” It is called “Bí Bí og Blaka” and I found it written on a pillow provided by the airline Icelandair, which tends to get creative with flights by introducing foreigners to various Icelandic facts and properties of language while they’re flying. 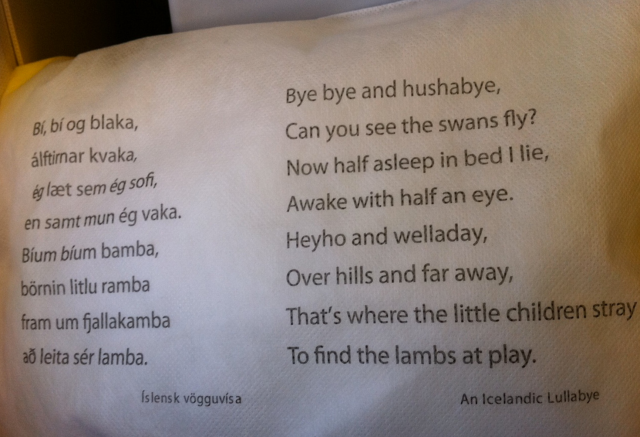 Of course, the translation has been adapted to rhyme in English, but the general story is the same. One aspect of the Icelandic is entirely made up in the original, though. This would be “bí bí og blaka” and “bíum bíum bamba,” which are more like nonsense words (An equivalent to this would be “rock-a-bye baby” in English lullabies).

To hear the song being sung, there is a video featured on the Icelandic broadcasting station RÚV sung by Thora Einarsdottir:

The song has such a rhythm synonymous to the flow of English lullabies, namely ones I heard as a child, and really take on the quality of drearily falling to sleep.

Another notable example of nonsense words are featured in a second Icelandic lullaby called “Bíum Bíum Bambalo.” This may strike one as a terrifying lullaby because the lyrics seem frightening for a child to hear, but the message behind them is a positive one. I will present to you the approximate translation of the lyrics here:

When the mighty mountains
fill your chest with burning desire,
I will play the langspil
and soothe your mind

When the cruel storms rage
and the dark blizzard crouches above,
I shall light five candles
and drive away the winter/twilight shadows

“But outside, a face looms at the window.” Wait…is this really supposed to quell children and send them into slumber? Well, it is notably a song that isn’t quite so delicate as some lullabies, but there’s a history of Nordic and Icelandic lullabies that use properties of evil to send messages that soothe. Consider for a moment that face: It looms outside the window, yet the rest of the song speaks of a security and comfort inside, where the looming face hasn’t reached yet. So in essence, the property of evil further comforts the lack of evil in the direct environment. This lullaby has been around for many generations through the word of mouth, but was finally recorded by Sigur Rós in 2000 and used in the film “Englar Alheimsins.” Unlike the first sung lullaby, this one is much harsher and intense to the ear. It hits stronger and progresses into a climactic instrumental piece.

Like Loading...
This entry was posted in Uncategorized and tagged lullabies, Music, Sigur Rós. Bookmark the permalink.